Battlestar Galactica is a team game with intrigue, betrayal, and drama. Players are on either the Human's or the Cylon's team, except they don't know who is whom.

The human player must travel 8 units of distance as indicated by the Destination Cards, then make one more jump to win the game.

The cylons win by preventing the humans from completing their objective. It can be done by: 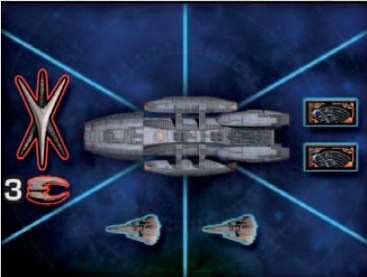 Remove "you are a sympathizer" card from deck. Remove cylon cards from deck and shuffle separately. Add cylon card to loyalty deck randomly per this table

Add one extra "You are NOT a cylon" card for each Sharon Valerii and Gauis Baltar chosen.

Deal one card to each player, place rest of deck beside table.

Each player takes a complete turn before moving to the next player. Each turn consists of the following 6 steps

Player draw skill cards listed on character sheet. Skill cards are played during skill checks or used as an action

Player may move character token to another location. If moving between Colonial One and Galactica, must discard one skill card. Humans may not move into Cylon locations. Revealed Cylons can only move in Cylon locations. Any number of players can move into the same location.

If the player is in a viper, they may move to adjacent region or discard skill card to move back to Colonial One or Galactica. The viper is placed in reserve if the player moves back into a ship.

Players may perform ONE action. All actions are identified by the word "action:" followed by its ability. Possible actions are:

Perform action indicated on Character sheet. Only some characters have actions listed

If player starts the turn in a viper, they may activate it to move again or attack a cylon ship

Play one of these card as an action as indicated

The hidden cylon player may play their loyalty card to Reveal themself as a cylon.

Draw a crisis card. As indicated by the type of card, resolve skill check, event, or cylon attack. Crisis Cards drive the main story of the game.

The crisis card will indicate the required strength and allowed skill card types to pass the crisis. Resolve the skill check as follows

After the crisis has been resolved, if there is a cylon ship symbol on the bottom left, activate the ship indicated by the symbol. See Combat for more details.

Each raider takes the first action it is able to perform

If no raiders on board when activated, launch 2 from basestar. If no basestar, nothing happens

Each base star Launches 3 raiders. Nothing happens if no basestar

If the Crisis card has the "prepare for jump" symbol, move the token ahead on the jump preparation track. If the token is moved to the auto jump space, jump the fleet by performing these steps

If the marker is on one of the blue spaces on the track, player may force a jump by activating FTL control as an action. The player rolls a die. If the dice is 6 or lower then population is lost as indicated on blue space.

Attacks are performed when ships are activated. Roll a 8 sided dice

Use the attack table to determine outcome

Vipers can be activated from the Command location. When a viper is activated choose one of the 3 options

Only characters with the pilot ability can pilot a viper. The player may move the viper during the movement step, and may move again or attack during the action step. When the fleet jumps, the character is placed in the hangar.

Destroyed cylon ships are removed from the board, but may return later.

When a Raptor is destroyed, it is removed from the game

When Basestar or Galactica is damaged, draw appropriate token

Basestar is destroyed when 3 or more damage tokens are present. Remove basestar from board

Cylon players work secretly against the humans to run out a resource, destroy Galactica, or cause an centurion invasion.

After distance 4 is jumped, the sleeper agent phase is active. Players receive another loyalty card. Any player with at least one cylon card is a cylon. On some player counts, there is also a sympathizer card.

Sympathizer sides with the losing team. When one gets this card, immediately reveal it. If at least one resource is in red, the sympathizer is on the human team and is sent to brig. Otherwise, the player becomes a revealed cylon and performs the revealed cylon action.

Revealing yourself as cylon is an action. When that action is taken, perform these steps

On the revealed cylon's future turn, perform these steps. There are no crisis or activate ship steps.

The Cylon player can play one skill into each skill check. They cannot use any skill abilities.